A pulp mill was experiencing numerous operational inefficiencies throughout the pulping process as a result of its obsolete MYCRO DCS control system.

The Need for a New, Modern Control System

When we started this engagement, this pulp mill was using a Moore Products Co. MYCRO DCS – a 1980s technology that used operator consoles connected to multi-loop controllers (MLCs) via a proprietary network. In addition, an independent computer interface was providing a process data connection to an OSIsoft PI system that serves as the plant historian.

The mill was running into issues maintaining the MYCRO system as it was now obsolete and parts for repairs were becoming increasingly hard to obtain. Additionally, very few engineers were left in the workforce that were familiar with the system’s configuration and programming techniques, making process control improvements difficult to implement. To address these obsolescence issues, this customer brought in ACE to replace the MYCRO DCS with a Siemens PCS 7 DCS through a four-phase upgrade process.

To minimize downtime and spread out the investment in this upgrade, the project was split into four independent phases. In Phase 1 we migrated approximately 550 I/O points, replaced two MLCs associated with the digester and pulping process, and set the foundation for further Siemens PCS 7 work. In Phase 2 we continued to expand the work done in Phase 1 by migrating another ~450 I/O points and replacing the controllers used for the bleaching and washer systems. The diagram below shows what the control system looked like after the first two phases were implemented. 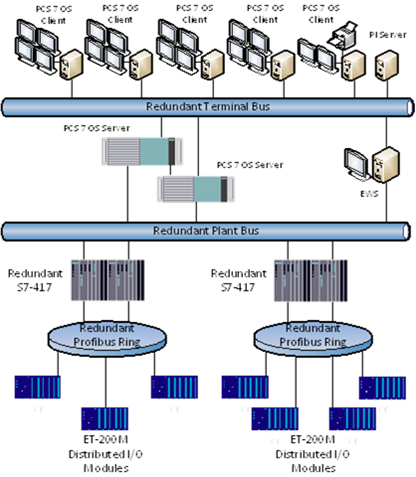 During these first two phases we also conducted upgrades to the wastewater treatment plant at the mill. We installed PCS 7 controllers and added new HMIs to replace antiquated Foxboro equipment installed in 1992. Some of the functionality we designed into the controllers includes the ability to provide a chemical addition site for 50 percent caustic substances, acid sewer pH reactor control, the ability to add CO2 to the #1 and #2 clarifier sequential flow valve controls, ASRT scrubber control, and the ability to offer sufficient residence time to keep discharge water quality in compliance with EPA guidelines.

In Phase 3 we programmed the bleaching controls associated with the chlorine dioxide (ClO2) production and chemical preparation. This mill uses the polyaluminum chloride/polyacrylonitrile (PAC/PAN) process. We also programmed the chemical make-down for the reactors and controls, which now provides a 60/40 split of methanol and peroxide to reduce the amount of acid and peroxide needed during this step. By using a master production loop in conjunction with a bias controller, operators can set the flow requirements for the chemical flow lines used in producing ClO2, which includes the sulfuric acid, methanol, chlorate, and hydrogen peroxide lines. Finally, during this phase, we configured both cold and normal start-up controls for the chemical reactors.

We documented all these changes by providing Scientific Apparatus Makers Association (SAMA) drawings for all control loops. These drawings have been very useful tools for the customer to both understand the control processes and to perform loop troubleshooting.

In Phase 4 we upgraded the brown stock washer controls and completed the replacement and decommissioning of the MYCRO equipment by balancing the plant. More specifically, this phase involved the development of the controls for the de-knotters, two stages of vacuum washing, and screening and deckering with a single-stage vacuum washer. These changes were made so that the mill can produce the highest quality clean pulp from the brown stock supplied by the digester and also recover as many of the chemicals used in the cooking process as possible.

To wrap up this project, we balanced the plant at the end of this phase which included all peripheral control devices, the steam heater selector, defoamer control, warm water makeup, cooling water recycling, and other manual and automatic motors and controls for the remaining outlying areas. This phase also included tying in other areas of the mill that share data and control with the pulp mill such as the powerhouse and wastewater recovery area. These last two phases together contained an additional ~800 I/O points in the powerhouse and wastewater recovery systems that we modernized and integrated into the Siemens PCS7 DCS.

During this upgrade, we did not make any functional changes to the existing OSIsoft PI historical data system except for the required data source changes. For example, since the PI system supplies setpoints and control parameters to some of the DCS control loops that are required for production, if a data point source such as a tag or software identifier was changed during the upgrade, the PI system was updated to maintain the integrity of the data. Also, the PI system now contains plant data from before and after the DCS modernization.

Throughout the different phases of this upgrade, we provided the client with operator training manuals for each part of the control system. After all these changes, the pulping process, which includes the chip handling, Kamyr digester, and diffuser, is now running on PCS 7 and being monitored on eight flat screen monitors. The bleaching process, which includes five washers, chemical addition, and bleached storage, is now running on a second control panel and being monitored on another set of eight flat screens.

Benefits of this Control System Modernization

The introduction of PCS 7 in this pulp mill provided a vastly improved control system and operator interface that in turn improved operability. As a result, many efficiency gains were made. First, because the client now has tighter chemical controls, the mill is now seeing a measurable decline in the amount of chemicals needed to produce a ton of pulp. This means there are now less chemicals required at the wastewater treatment plant to treat the wastewater to comply with EPA standards. The quality of the pulp going into the paper machines was also improved and downtime was greatly reduced. Finally, with this new control system, new process techniques are easier to implement and troubleshooting process problems is faster since data is organized and presented in a much more intuitive manner.