Developing a reliable control system for a wave energy converter (WEC) prototype that can also provide an uninterrupted high-speed data stream to an onshore monitoring site.

Applied Control Engineering (ACE) collaborated with Oscilla Power to identify the most appropriate technology for this application and we used our control system expertise to design, develop, and deploy a control system based on the Siemens Totally Integrated Automation (TIA) Portal.

With more than 70 percent of the Earth's surface covered by water, waves hold enormous potential as a large-scale source of renewable energy. According to the United States Energy Information Administration, the theoretical annual energy potential of waves off the coasts of just the U.S. is estimated to be as much as 2.64 trillion kWh, which is the equivalent of about 64 percent the electricity generated in the U.S. in 2019. Realizing the tremendous potential for wave power to significantly change the way we generate energy, Oscilla Power began developing a sustainable and reliable wave energy converter (WEC) that could economically tap into this resource.

Currently, Oscilla Power is working on two versions of its WEC – the Triton-C, a 100-kW-rated system designed for remote communities or small coastal facilities, and the Triton – a larger, 1 MW-rated system designed for large arrays that can provide utility-scale power. As Oscilla Power proved its WEC system concept in the lab and was ready to move on to a larger-scale field prototype, it needed to develop a reliable control system that could be integrated into the float to monitor the status of the float and subsurface equipment and adjust parameters to explore and maximize power generation.

To determine the best option for a dependable, fast control system for its WEC, Oscilla Power reached out to our experts at Applied Control Engineering (ACE). This multi-phase project began a number of years ago when ACE partnered with Oscilla Power to work on the definition of the control system requirements for their base architecture, which was then followed by the development of the control system design package and configuration for the Triton-C. ACE is now assisting with the commissioning of the Triton-C, which will be tested in Hawaii from October 2021 to October 2022.

The control system for this prototype needed to reliably and concurrently control three independent drivetrains used to convert the device motion into electrical power. However, the inherently harsh environment that WEC systems are used in, presented a number of unique design challenges for the prototype control system. First and foremost, it had to be able to function reliably while unattended in a rough ocean environment. Due to the offshore location, the control system also needed to offer remote monitoring and control and high-speed, consistent data transfer and communication to the onshore monitoring facility. Finally, since the control system is just one of many components that must fit on the float, weight and physical size were also key factors.

To meet these requirements, we selected the Siemens S7 platform with Totally Integrated Automation Portal (TIA Portal) and WinCC RunTime Professional. Beyond the ability to provide the necessary control capabilities and offer reliable communication with multiple subsystems, Siemens TIA portal was also selected because Siemens has a large international footprint. That means any Siemens parts that might be needed in the future can easily be accessed wherever these systems are deployed.

After identifying the main framework for this control system, ACE worked with Oscilla Power to develop a functional specification. Beyond defining the specifications for the control system hardware and software, ACE laid out the requirements for a communication network that would provide for high availability and appropriate network security. This included a hardwired path and backup cellular communication to ensure access to the float is never lost even in bad weather conditions or in the event the main communication cable is disconnected. Since a wireless system was used for redundancy, cybersecurity concerns related to communicating the data across a public network had to be addressed.

Space is limited onboard the Triton-C making this a key design consideration as well. To address this, a single PC needed to perform the double duty of local visualization and historical data collection. To ensure adequate control of the system, Oscilla Power required certain data to be collected every 20ms. The data collected locally also needed to be mirrored onshore for backup purposes and for easy access by Oscilla Power’s engineers.

With the design approved, the detailed design and implementation work began. As mentioned, Siemens was selected as the control system vendor for its international presence. Another advantage TIA Portal offered was that it enabled management of the development of the Siemens S7 control system and design of the WinCC front end with a single system. The TIA Portal also offered seamless integration between the PLC and the Siemens Motor Control Center (MCC) by providing the ability to configure the motors, HMI, and PLC within the same platform.

Beyond these control and monitoring functions, ACE also set up interfaces for TIA Portal to communicate to the following external systems:

The Speedgoat system is used to perform advanced calculations to determine the ideal torque required by the generator to maximize the energy produced by incoming waves. A custom Python script ACE developed collects a combination of data including web-based weather and satellite information, wave data from remote buoys, and local measurements at the float and pushes that data to the PLC where the Speedgoat has access to it via MODBUS. The Speedgoat system uses the data to calculate the most efficient torque for the generator and passes that information back to the control system, which, in-turn, sends a signal to the MCC. Real-time adjustments are then made to the float’s parameters to maximize the wave energy captured and power produced by the Triton-C system.

Due to space constraints on the WEC, the local SIMATIC Industrial PC (IPC) served in multiple roles. In addition to serving up the graphics for the local HMI, the IPC runs the python script described above and hosts a virtual machine dedicated to the historian provided by Canary Labs. Since this system is unmanned, Win911 was also integrated to provide real-time alarm notifications via email and text message to the engineers when abnormal conditions are detected.

ACE further developed custom PLC function blocks and corresponding HMI faceplates per Oscilla Power’s requirements. The HMI, while it is running locally, is also accessible to the engineering staff onshore. To make it easier for onshore engineers monitoring these systems, especially as the number of units deployed is expected to scale in the future, ACE worked to adhere to ISA-101 guidelines for situational awareness. We used grayscale graphics with color reserved for alerts or abnormal conditions and developed an intuitive, single-click navigation so that engineers can quickly identify and mitigate any potential issues with the float (Figure 1).

Since this is a prototype and intended to validate functional and power performance, Oscilla Power wanted to collect as much data as possible and had a requirement to collect data every 20 milliseconds. Because of its ability to meet the necessary data collection rate, ACE selected Canary Labs Historian software to collect data from the float. Oscilla Power also asked ACE to develop public and private facing dashboards, with the public facing dashboard containing custom trend screens to view historical data as well as additional key data points such as power output and weather information. We also enabled the IPC on the float to store the data locally in case communication to the onshore historian was ever lost.

ACE engineers are currently working with Oscilla Power to complete commissioning and deploy this prototype at the WETS (Wave Energy Test Site) offshore of the Marine Corps base in Kaneohe, Hawaii (Figure 2). 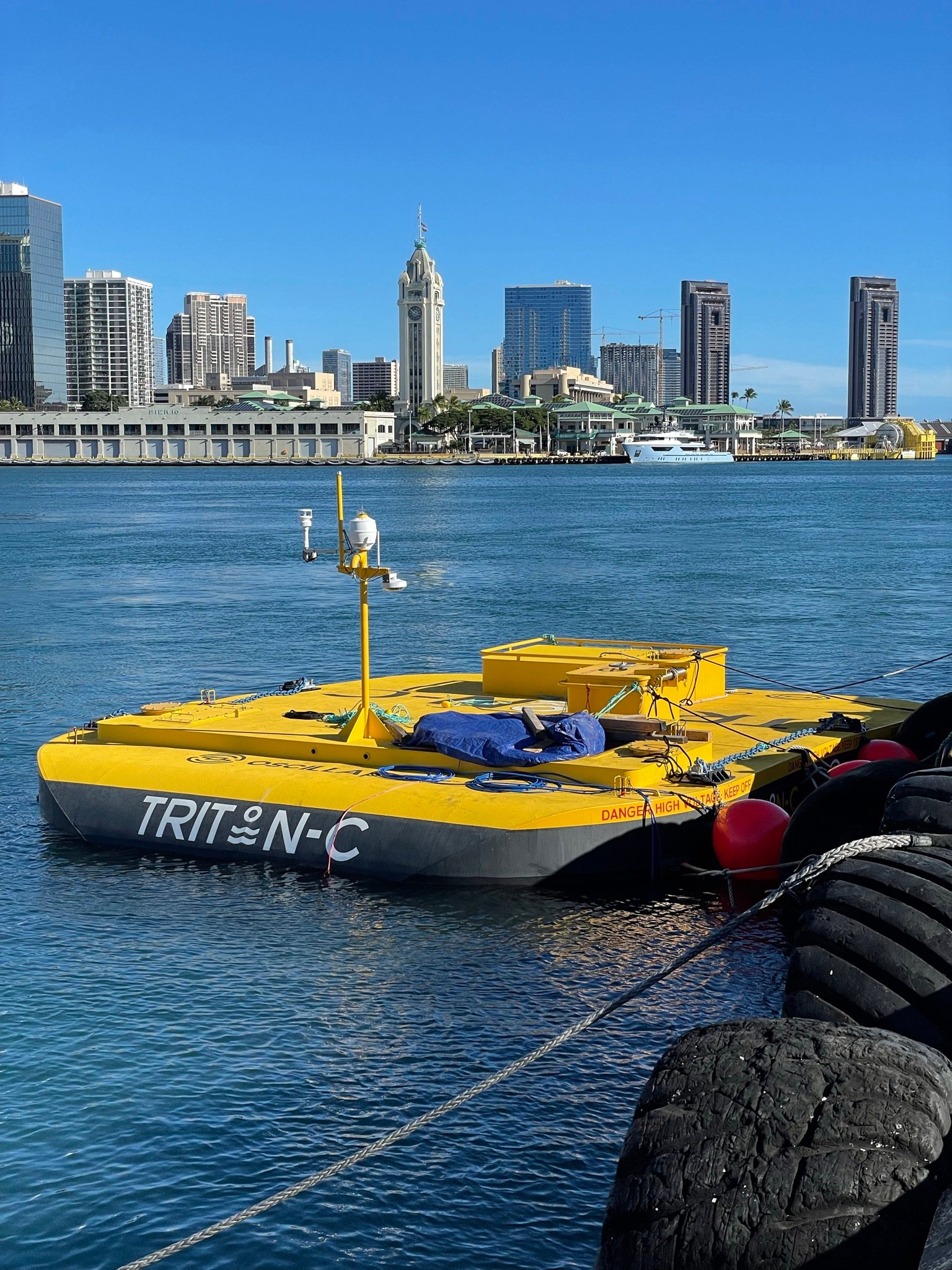 Throughout this year-long trial of the Triton-C prototype, ACE will continue to provide remote support to bring the Triton online by performing final system checks and integrating the communications to different pieces of the system as they are installed and powered up, including the MCC, GPS, and the primary capacitor bank.

Setting Up Oscilla Power for Success

Throughout this multi-phase design and deployment, ACE’s partnership with Oscilla Power grew as they collaborated on all aspects of the process, including identifying the appropriate control system platform, ensuring the functional requirements were met, and designing and developing the control system to ensure reliable performance in a harsh environment. The Siemens platform we selected offers the perfect combination of robustness and high-speed communication required for this application.

Oscilla Power and ACE will continue to work together through the development of the larger 1MW Triton, which is expected to be based upon the same framework described here for the Triton-C. ACE’s priority is to ensure that Oscilla Power’s WEC technology is well-positioned to deliver cost-competitive, utility-scale energy that can complement existing renewables and help reduce society’s reliance on fossil fuels.

Learn more about partnering with ACE to identify, design, and implement the best solution for your control system design needs.

Learn more about our Experience working with Siemens Technology